What Is Hemp?  How is it used?

What is hemp?  Well, it is one of the first crops domesticated by man.  Archeologists discovered hemp cords at a village site in Taiwan that date back to the stone age.  Early civilizations in India, China, and Europe all utilized hemp.  Hemp is the fiber of the cannabis plant, extracted from the stem and used to make rope, stout fabrics, fiberboard, and paper.  However, less than one percent of hemp contains any THC, thus giving it no psychoactive qualities. 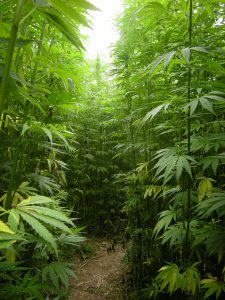 Hemp has many valuable properties to it making it rather useful!  Hemp seeds are edible. They are nutritious, protein rich, high in fiber, and can be used to make butter, oil, cereal, and breads.  Hemp is also used in building materials.  Fibers from the hemp stalk help create stronger, safer and cheaper building materials.  Hemp was also used as the world’s first paper!  Hemp paper dates back thousands of years, requires fewer chemicals, needs less energy and water, and offers us an alternative to the widely used wood pulp.  There are even some reports that state that the Gutenburg and King James bibles were originally both printed on hemp paper!

Hemp also makes a variety of fabrics.  Ten thousand liters of water are used to produce one kilogram of cotton, while hemp requires eighty percent less water to produce it!  Manufacturers can make all kinds of hemp based clothing.  Hemp is also very easy to grow compared to other textile plants. Cotton for example is a major cause of deforestation in the world.  Hemp is naturally resistant to bugs, requires no pesticides, grows in most conditions, and does not promote deforestation.  On Veteran’s day 2015, a hemp flag flew over the capitol to call attention to hemp farming.  The U.S. hemp industry made $600+ million in 2014, but not using hemp from the United States!  You may ask why and the reason is the U. S. Laws largely  prohibit hemp cultivation.  Prohibition hurts America!  It is time for United States to go green and grow hemp!

So watch this video on What Is Hemp?

Cannabis for Dummies – The Gateway Theory