How To Make Cannabutter

How To Make Cannabutter

Two Simple Ways on How To Make Cannabutter 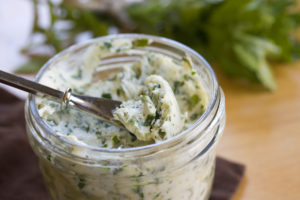 Cannabutter is a butter-based substance that contains THC (or, more specifically, cannabinoids). By heating cannabis and butter, the fat in the butter allows for the extraction of the cannabinoids. For more information, check out The Science of Cooking with Cannabis. You can also make cannabutter with wax but this article will cover making it from the leafs and buds. There are a number of effective methods for making cannabutter, two of which will be explained here.

Note: A ratio of 1/2oz cannabis to 3/4 LB butter is recommended.

First Method on how to make cannabutter

#1 – Place the cannabis tops on a baking sheet and place in the oven at the lowest possible temperature, or no higher than 150 degrees fahrenheit. This will help dry out the buds which aids its release into the butter. It also “activates” (decarboxylate) some of the inactive cannibinoids into the all important THC.

#2 – Crush the marijuana into a fine powder, using enough to fill a boiling pot roughly 1/3 full. Using a mixture of 1-part butter and 4-parts water, fill the pot until it is about 3/4 full. Bring the mixture to a boil and cook for 30 minutes. Stir frequently.

#3 – After about 30 to 90 minutes, remove any matter from the bottom of the pot. Strain with Cheesecloth. Cool at room temperature and then transfer to a refrigerator. The butter will form on the top and, once it has been thoroughly cooled, will harden so it can be removed from the pot. After removing the butter, discard the remaining water.

Second Method on how to make cannabutter

#1 – Using a saucepan, melt butter. Sift the marijuana and add it to the melted butter. Allow the mixture to simmer until the butter becomes green in color. Pour the mixture through Cheesecloth and press that saturated cannabis to squeeze out as much butter as possible. Repeat this process if extra potency is required (be sure to use the same butter for best results).

#2 – The cannabutter can be effectively frozen if it needs to be stored. It can also be stored in the refrigerator by pouring cold water over the top of the butter (the water keeps oxygen from reaching the butter and also stops the butter from floating to the top).

#3 – There are a variety of other methods for making cannabutter, all of which are effective yet somewhat similar to those previously described. Once you’ve gotten used to cooking with cannabis, you will be able to find a technique that works best for you depending on the preparations methods you prefer.

Important Information About Cannabis Food Safety Cannabis, like any other produce item, may contain air-borne pathogens, mold, and other contaminates. Marijuana not being used should always be stored in an airtight container, preferably a glass mason jar. When cooking with cannabis you should discard any marijuana plant matter that has mold or mildew. Cannabis should always be cooked or heated to above 140 degrees fahrenheit to kill potential air-borne contaminates.

It is important to know the footprint of the marijuana being used. Knowing what chemicals, if any, were used to produce it can be helpful information pertaining to your health.

Well we hoped you learned about how to make cannabutter and use it wisely in your daily meals.

If you would like to know more about cannabis read our “Cannabis for Dummies” section and impress your friends.