Understanding Terpenes: What Is Limonene?

Understanding Terpenes: What Is Limonene?

Lovers of energizing, uplifting sativa strains are most likely big fans of the pleasant cerebral buzz that ushers in a carefreeness, helps to shoo away gnawing fatigue, reverses bad moods and helps to increase focus, productivity and creativity. They have limonene to thank.

Though THC plays major role in the effects of consuming cannabis, terpenes also play an important role in how you will feel. Limonene is one of the most common and popular terpenes.
What is limonene?

When you take a whiff of a zesty, bright-smelling cannabis strain with bold hints of citrus or sour lemon aroma, you are inhaling the scent of a terpene called limonene. This terpene is not only found in cannabis, but is also present in plants, herbs and fruits like the rinds of various citrus fruits including grapefruit, tangerines, oranges and lemons.

But, there’s more to limonene than just being an aromatic compound. According to Steep Hill Labs, “Cannabis is unique in that each strain has a unique profile of terpenes. Terpenes are believed to exhibit medicinal properties independent from the cannabinoids. Overall, terpenes contribute to a strain’s particular influence — a phenomenon known as the entourage effect.” The entourage effect between terpenes and cannabinoids boosts the healing effects of cannabis. The synergistic interaction creates a power-packed dynamic that can produce noticeable changes in the body, mind and in your mood after consuming it. 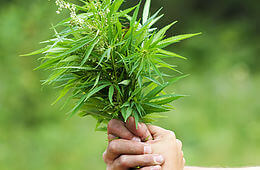 What are the medical benefits of limonene?
Aside from being known for its characteristics of being an uplifting, energizing and invigorating terpene, limonene has a number of therapeutic and medical effects. Early studies and reports say the terpene has been shown to help with breathing conditions like bronchitis, aid in relieving digestive and metabolic complications, stimulate the immune system to increase the body’s ability to fight bacterial infections and reduce inflammation associated with painful conditions like arthritis and fibromyalgia. It can act as a mood booster by helping to treat symptoms of depression and anxiety, promote weight loss, reduce acid reflux and heartburn and even aid in healing skin and tissue regeneration.
Steep Hill Labs notes, “Limonene also assists in the absorption of other terpenoids and chemicals through the skin, mucous membranes and digestive tract.”

Several studies have also shown limonene has a lot of promise in treating different types of cancer. It has anti-proliferative properties that can aid in inhibiting the growth of cancerous cells, as well as carcinogenic tumors. One study published in a medical journal called Anti-inflammatory and Anti-allergy Agents in Medicinal Chemistry demonstrated that limonene possesses the ability to prevent tumors from creating new blood vessels and prevent them from infecting surrounding skin tissue. Another study that was published in the Cancer Prevention Research journal showed limonene had a positive effect on breast cancer patients who saw significant improvements in their metabolic pathways.
What strains have limonene in them?

Though all strains have various terpenes, the amount of terpenes in a strain can vary depending on how and by whom it’s cultivated. Limonene is mostly present in sativa or sativa-dominant hybrid strains, although there are some indica strains with a small limonene content. Some common strains that have limonene in them are Super Lemon Haze (an upbeat sativa that is great for relieving stress and helping you to feel happy, euphoric and carefree), OG Kush (a mellow hybrid strain that offers relaxation and pain relief), Durban Poison (a potent sativa strain that will increase focus and productivity) and Jack Herer (a classic sativa strain that will boost your energy and creativity).
This post was originally published at this location

A long time cannabis enthusiast and traveler, I have amassed a great knowledge of the cannabis tourism industry.